At first, there was the church of Apostles Peter and Paul, built under the reign of King Clovis who was buried here with his wife Clotilde as well as Saint Genevieve. In the Middle Ages, it turned into an important royal abbey under the same name.

During the thirteenth century, the abbey church that hosted the local parish became too small for the growing population, so a second sanctuary was built under the patronage of Saint Stephen, the first martyr. This latter church was eventually rebuilt between 1492 and 1626, in the confused context of the religious wars. The existing Saint-Etienne church was flanking Saint Genevieve abbey. In 1744, King Louis the Fifteenth decided to replace the abbey church, then in poor condition, by an imposing monument which eventually became, through repeated mishaps, the existing Panthéon. The abbey church was devastated during the French Revolution and the relics of saint Geneviève were burnt. The buildings of the abbey were converted into what is now Henri-IV school and the abbey church was pulled down in 1804 to make room for Rue Clovis ; its only remnant now is the bell-tower, enclosed in the school premises.

Saint-Etienne du Mont then inherited the relics of and the devotion to Saint Genevieve. Stained window of Saint Genevieve : the procession for the saint.

On this window (crafted in the nineteenth century) one can recognize the façade of Saint-Etienne-du-Mont church and on its flank, Saint Genevieve church (the bell-tower of which is now Clovis Tower inside Henri-IV school) which the procession is entering. 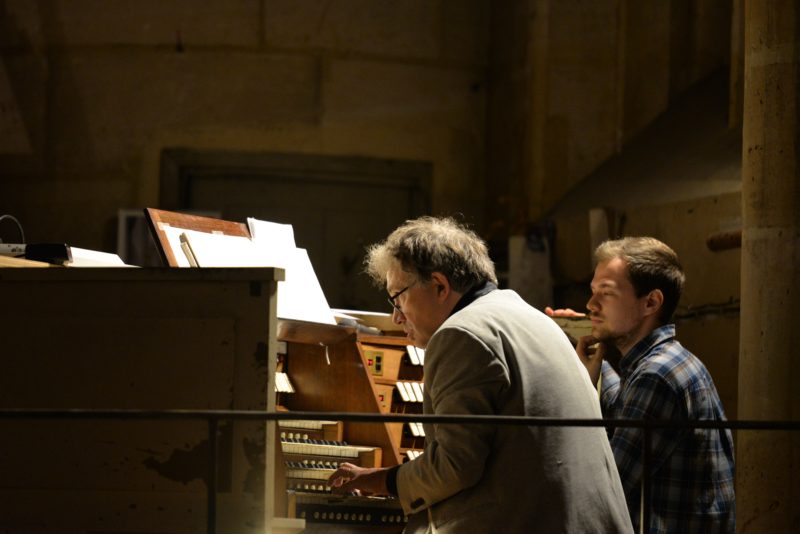